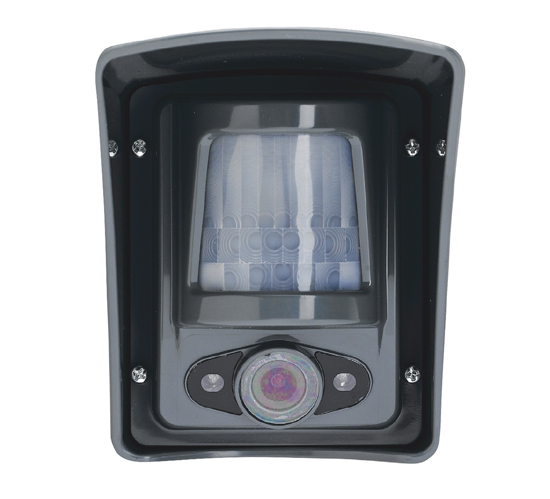 The Outdoor MotionViewer Model DCV is a wireless, battery operated, outdoor motion activated camera designed for use in RSI Video Technologies security systems. Motion- activated cameras are intended for applications where video verification of intrusion alarms is necessary or desired.

The DCV consists of a digital camera, a passive infrared motion detector, and S2 VIEW spread spectrum, videofied interactive, encrypted wireless cicuitry for secure two way communications with the control panel. The camera consists of a CMOS black and white sensor and an 85 degree, wide angle lens. Two infrared LEDs provide a night illumination distance of up to 30 feet/ 6 meters. For motion or movement detection, a Fresnel lens inside the cover captures up to a 40 foot wide, 85 degree angle passive infrared pattern depending on the temp and local conditions. The base allows for gimble arm mounting and waterproof casing. A tamper function provides cover tamper detection.

TheMotionVieweristypicallyinstalledtosecureoutdoorareaswhere there is a temperature fluctuation and areas where broad viewing/ detection coverage is needed. When the alarm system is armed and the motion detector senses motion or movement, the detector transmits a signal and activates the camera, which captures a 10 second digital video segment. The control panel recieves the signal and responds according to system configuration/programming.

The alarm and video segment are reported via the control panel to the central monitoring station. The detector is powered by three lithium batteries that can last up to four years or more, depending on the amount of detector activity and ambient temperature

Open chat
Hello! How can we help you?
Powered by
Stratel